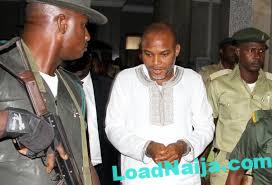 Nnamdi Okwu Kanu is a Nigerian Biafra political activist, who is also a British citizen. He is the leader of the Indigenous People of Biafra. Kanu founder of the group called IPOB in 2014

According to the latest report he was among the wanted list by the Nigerian Government, for trying to disrupt and also corrupt the mind of Nigerian ctizens in other for them to agree with his noble course of creating a new IPOB country called the biafra country.

He however have already declared the state that will be involved in this new country mapping out most of the Nigerian state to b involved for his act he was declared wanted by the Nigerian Federation, which he was been tracked for years without knowing.

he was captured by the interpool and also through the help of a Lady who have been with him for long not knowing she was doing her job in other to get him and bring him back to his Real country Nigeria, the son of the Kaduna state governor said he should be locked up in jail with cow’s in other for him to be treated as animal whisch is so sad.